I love having a baby around – especially on ‘occasions’. I’m usually a real Grinch at Christmas but now I can’t wait to wrap his pressies and watch him struggle with the paper. I suspect he won’t realise the significance of the day as he’ll only be 7 months old; my childhood memories start around 3 years old so I’m not silly enough to believe he’ll be raving about his first christmas to his mates at school. It doesn’t stop me wanting to make the day  special though. So for the first year ever I’ll be decorating the house, lighting cinnamon candles and playing Christmas songs.

So in the spirit of creating memories, we simply had to celebrate bonfire night and get our lazy bums off the sofa. At first we were unsure about taking Dexter to a firework display as he’s so tiny we were worried he’d cry at the loud noises, crowds and freezing temperature (and it would mean missing X Factor). But it was an opportunity to spend time as a family, and I couldn’t resist giving it a go. So we bought him a super warm snowsuit and  googled the local displays to work out where to go. 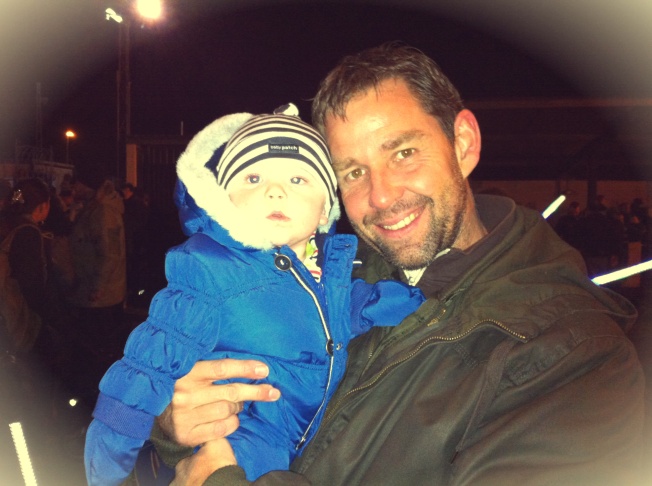 As is so often the case – we were out of the door late. This is typical of Craig and I. No matter how well we plan, we’re always rushing around at the last minute and bickering. We usually sit in the car then realise we’ve forgotten something and have to run back inside the house at least 3 times before we actually get anywhere. This was no exception. I’d gone a little overboard on the layers and was so wrapped up I couldn’t even bend over. Typically I decided I needed to use the toilet before we went so Craig had to help me strip off the 20 leggings I had on (as 20 jumpers somewhat restricted my ability to perform this most simple of tasks). The whole saga meant we left an hour later than we’d intended… already we were off to a bad start.

The display wasn’t much to write home about. It was held at a local Sunday-League football ground and was a fairground / firework combo. The entire ground was poorly lit making every step hazardous. At one point, Dexter’s buggy got caught in the mud and it was fairly amusing watching The Man dig his shiny white trainers into the brown goo to leverage our son out of a hole. To top it all off, we forgot the Canon so had to rely on the iPhone to capture the experience. I queued for an hour for a beer in order to console myself!

A rare photo of the 3 of us. This was after I’d queued for an hour for a beer…

As you might expect, the fireworks started late. I suspect they were desperately trying to fix the sound system as the display was set to music (at least I think it was as there was definitely some distorted screechy sound emanating from the speakers). We’d picked a spot close to the entrance so we could flee if Dexter hated it. With a wry smile, we scooped Dexter out from his buggy, held him up so he could watch, and waited for him to scream.

But no! He LOVED it. It was so sweet watching him follow the fireworks with and try and work out what on earth was going on. We had a right giggle when the rockets went off and Dexter omitted a little “OOOooo”. So he’d done it again – made a miserable and crappy situation Fun. How much do I love my son!?

I’ve hooked this post up to the Mummy Mugshot linky which is hosted by the fabulous Life, Love and Living with Boys – she’s trying to get all us mummy’s to appear in more photos with our kiddies! If you’re feeling brave, click on the badge below and join in the fun… No excuses now!

Can’t find what you’re looking for? 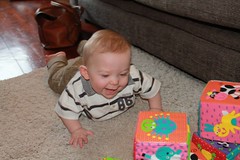 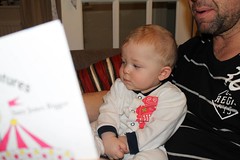 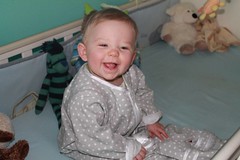 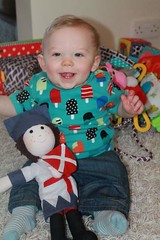 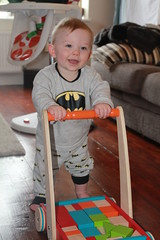